Yesterday, we went here in Elk Grove, Sacramento. it’s the house of my dad’s friend, Tito Teddy, actually, the family was a neighbor in Lipa. basically, they know each other since they were kids. They prepared really good food- afritada plus some food I am not familiar with and leche flan-lipa style! oooh! so yummy! 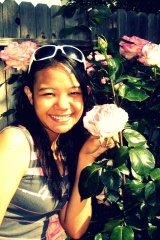 Tito Teddy’s daughter, Ate April brought me and my sister to her work at Starbucks Elk Grove. Then, we picked up her cousin, Jamaica and her friend to join us. We went to her house overlooking a lake. It’s so beautiful. Then, we went to Ulta. woohoo!! It’s full of make up stuff and perfumes and everything a girl would want. I really really really enjoyed that place. haha. Sayang i wasn’t able to bring enough money. pero shempre hindi mawawala yung fulfillment na may nabili din ako dun. haha. We went to Bath & Body Works after. We rented Dreamer and Infection which we planned to watch at Hollywood Video and went home. We ate yummy steak for dinner and watched Sa Piling Mo and Gulong ng Palad. Missin’ pinas noh? In short, we weren’t able to watch the movies we rented. haha.

Today, we went around Sacramento. We went to the Governor’s office… yeah, Arnold Schwarzenegger’s office. Sayang, na late kami ng punta. wala daw siya dun every Friday. pero he was there earlier kasi may stuff he had to do.