Quick service restaurant giant McDonald’s Philippines, majority owned and operated by its Master Franchise Holders, Chairman & Founder Dr. George T. Yang and President & CEO Kenneth Yang, announces the transition of all of its stores across the Philippines to strawless lids, marking another milestone in the company’s sustainability initiatives. 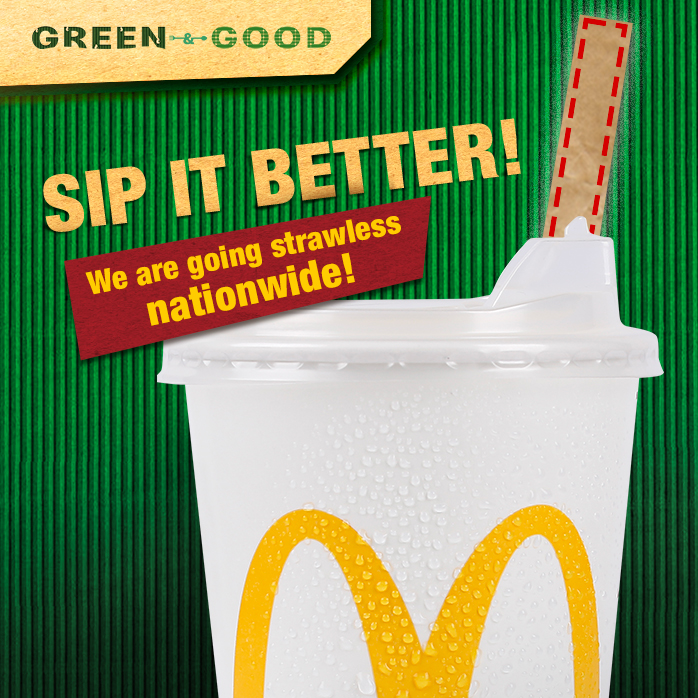 McDonald’s is the first QSR giant to go strawless for its iced beverages, underlining the company’s commitment to reduce waste by eliminating the need for a separate plastic straw, while keeping drinking convenient for customers whether they’re at home or on-the-go. This is one of McDonald’s latest efforts for its Green & Good platform– the company’s commitment to the environment, by developing and scaling sustainable restaurant solutions in its stores.

The strawless lids are designed to complement favorite McDonald’s beverages, continuously giving customers that familiar feel-good experience whenever they enjoy their favorite McCafé Premium Roast Coffee and other cold beverages served without sundae.

“The adoption of strawless lids is part of our commitment to be better for the environment. We recognize the role we play and the impact we can make by committing to innovate and scale initiatives that reduce waste. By making strawless lids permanent, waste reduction, one less straw at a time becomes something that our customers can easily integrate to their experience at McDonald’s,” says McDonald’s Philippines President & CEO Kenneth S. Yang.

The shift to strawless lids comes after McDonald’s first introduced the limited distribution of straws across its branches in 2018. The company is able to take a bigger step towards climate action by going strawless nationwide, now making it a permanent and sustainable solution.

McDonald’s has also implemented other projects under its Green & Good platform. In 2020, McDonald’s opened its first Green & Good flagship store in U.N. Avenue in Manila and in 2021, its second Green and Good store in Shaw Boulevard, Mandaluyong. Since, the company has expanded Green & Good with the introduction of new solutions in its restaurants like solar rooftop panels.

In support of active sustainable mobility to reduce carbon emissions, McDonald’s also empowers the biking community through its inclusive dining solutions such as bike racks and Bike and Dine areas available in its stores. McDonald’s, in partnership with eSakay, is also providing e-charging stations in the same branch, where e-bikes and e-scooters can plug in for a minimal fee of Php1 for a minute’s worth of charge.